How to Kill a Great Character Design, Part One: Twinning and Parallels

There are some basic design "rules" for drawing characters for animation, and some of them have already been discussed here . These rules can also apply to other types of drawing, such as figure studies, illustration, portraits and the like. I put "rules" in quotes because they have some flexibility and can be broken on occasion in various circumstances. But if a student of character design is in the early stages of developing his or her portfolio, it is best to keep all of these rules in mind while doing so. Avoiding these character killers early on can lead to successful drawing habits in the long term!

Twinning and Parallels
We've all seen them; stiff, lifeless poses that seem more wooden and flat than Egyptian hieroglyphics. Two factors that often contribute to this are the employment of Twinning and/ or Parallels in the pose. Frank Thomas and Ollie Johnson demonstrated the killing effect of twinning in their classic animation manual "The Illusion of Life": 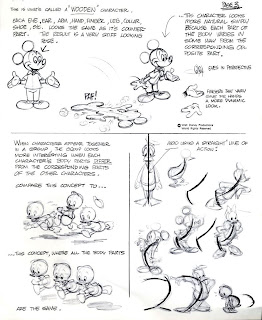 Does this mean that symmetry is always a bad thing? Certainly not! But when creating a character for almost any application variance within an otherwise symmetrical design is what creates a natural and visually engaging figure. Take this illustration, titled "Ancient Bloodlines" by the award winning fantasy illustrator Dan Dos Santos. On the left is the original illustration, on the right we see two halves of the illustration "twinned" with one another. Click on the image to enlarge it and look at each, one at a time, and notice the variations on each side of the original painting; from the number of feathers in her headdress to the use of shadow and finger positions. The cumulative effect of all these variations is a character that feels more natural, alive and engaging than the twinned version. Note also how many vertical, horizontal and diagonals can be found within this composition, all given to us by the costume design and finger positions (none of the fingers are paralleled). These keep the eye moving and engaged: Similarly, another way of enlivening an otherwise static poses is to cut into the strong vertical or horizontals with diagonals that are added using drapery, props, long hair, or background elements, as is seen in the image by the Art Deco master Erté on the right, and the image of the knight on the left (I'm still searching for the illustrator of this one; if you know who they are please email me so that I can credit them)! Erté defined Art Deco "as a fusion of the curvilinear designs of Art Nouveau of the 19th Century with the Cubist, Constructivist, and geometrical designs of modernity." In other words; a well balanced use of straights against curves. 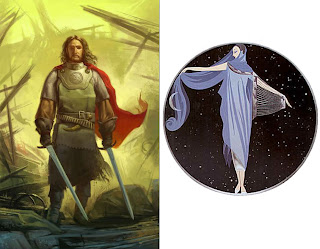 Symmetry is often used when creating turnaround drawings for model sheets, particularly for television animation (see the sample of Nightwing by Greg Murakami, below). The pose is indeed stiff and wooden, but it serves it's purpose as a clear schematic for animators and assistants. Feature Film artists tend to use far more varied poses for their turnaround model sheets: 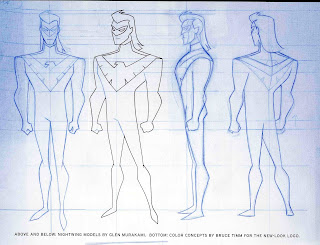 Parallels are similar to twinning, but aren't a near mirror image of what is happening with the other side of the figure. They occur when body parts or props inadvertently parallel one another in an otherwise natural pose, as is seen here in this character design by Jason Adams. An otherwise winning pose is thwarted by the parallels created by the arm and leg of the left hand side of the figure (Figure A.) Altering either would remedy this, or even resorting to something closer to a classic fencing pose which can still feel stiff with tension and formality, but avoiding the trap of parallels still keeps it somewhat natural (Figure B.): 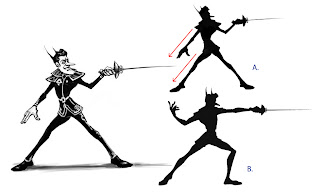 If showcasing just one example of of a character design, a 3/4 view is generally your best option (see the darkened figure in the Nightwing model sheet). A 3/4 view doesn't offer many opportunities for twinning and it also conveys a greater sense of dimension that a front or side view, particularly if you're presenting a line drawing without adding shadows. Add natural body and head tilts, variations in the limbs, fingers, and folds in the fabric, solid structure and anatomy and an engaging expression, and you'll have created a character with that elusive quality called "appeal": 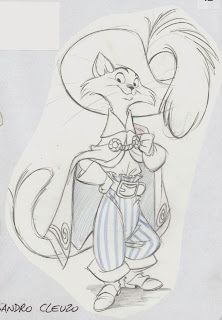 Puss in Boots by Sandro Cleuzo