In the first portion of this interview we discussed Greg's early career as an artist, with the disappointments of Fine Arts Courses and working in a Video Game store to his struggles as a Children's Book Illustrator. Greg thought there was no hope of a career as an artist so long as he lived in New Zealand. It wasn't until he discovered Weta Workshop that Greg entered the film industry and began working as a concept artist for one of the biggest and well known pre-production concept art and special FX visuals facility in the world. The first entry of this interview can be found here: Part 01 with Greg Broadmore. 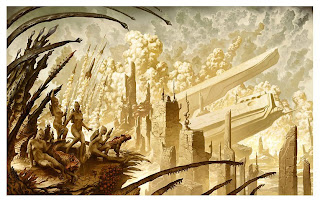 MC: Once the design is transitioned from 2D Concept Art to a fully animated and functional 3D Model, have you come across problematic areas concerning the function of the anatomy making sense?

GB: Yes. That's where the the rubber meets the road, and you find out quickly how many errors you've gone and built into your design. It's almost inevitable that a laundry list of problems will flow out from the design having to be practically implemented. You have to be flexible and try and figure out and accommodate solutions as best you can. 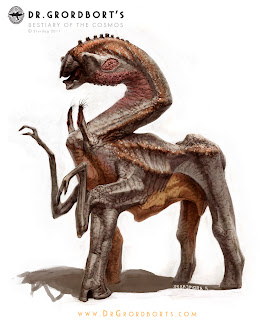 MC: Do you usually work closely with a CG modeler when they are working based off of one of your designs? If need be, do you go through revision phases at this point if some of the anatomy isn't making sense or completely plausible in a functional form? 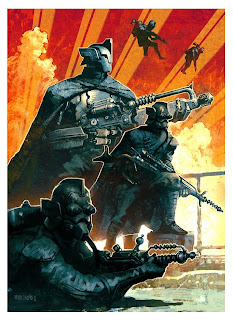 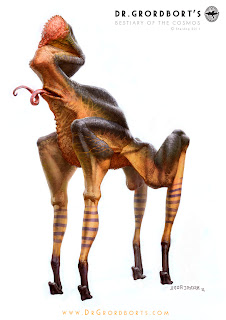 MC: What is your favorite part about concept design? Is it the rough pre-production stages where you get to really explore ideas of a broad range, or is it more satisfying to see a design once it's nearing completion and given the green light to move on to animation?

GB: Oh, definitely at the very beginning of pre-production when nearly anything is possible. I often get pretty bored having to resolve every detail. Spamming out a bunch of concepts is good fun however you look at it. It's one of the things I miss as I do less film work. 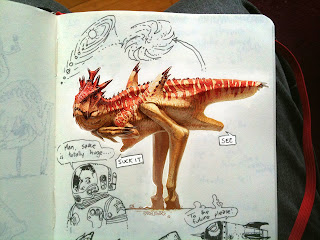 MC: Out of all the projects you've worked on, what creature/character that you played a part in designing is the most memorable for you? Why do you feel it stands out from the rest?

GB: For me, the Exo suit in District 9 is my favorite design. I was really happy with the design (even though it was the second full and completed design - the original design was axed at the last minute even though we'd built it completely as a prop and shipped it to South Africa). In all honesty it's probably my favorite just because the scenes it's in are so great. So, it has nothing to do with my design - all credit to Neill and the animators and Embassy VFX. 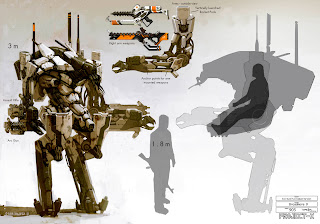 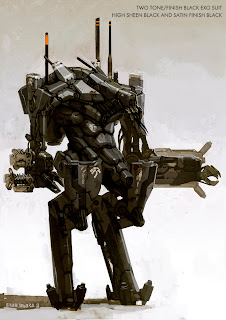 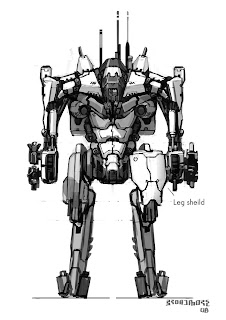 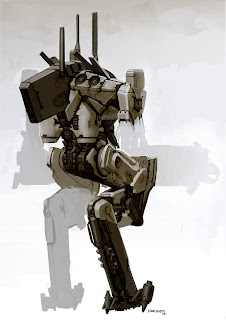 (Below is the original Exosuit design) "The original which was locked off and built as a full scale prop. During the 3d modelling process, Neill decided he wanted a heavier, more mechanical design so I started again and we built what you saw in the film. - Greg" 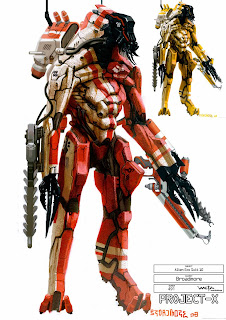 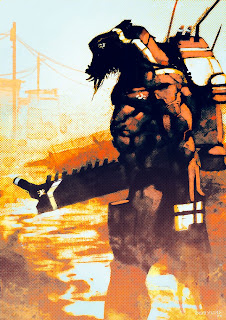 MC: If students are inspired by an artist' work, what is most important for them to focus on if they want to pursue a similar career in the same field? Do you think it's healthy or beneficial for them to try and mimic that artist' style?

GB: Hmm. that's a pretty tricky question. My gut answer is no, but when starting out of course I did the same as most artists when they're young. I tried to mimic the styles of many 2000 AD artists, like Simon Bisley for instance. So it's probably a very valuable thing to do - to examine an artists style in detail by copying aspects of it. But I wouldn't recommend doing it for too long. You'll go blind. 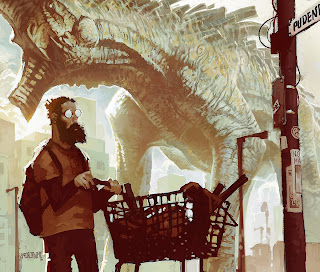 MC: Who are some of the creature/character artist that have inspired you? What is it about their work that motivates you and interest you?

GB: I don't have an answer for that really. I think most of the artists that have inspired me have been from outside the film industry. I grew up with 2000 AD and soaked that up, and then as an adult I've been inspired by N.C. Wyeth among others. I think James Gurney is an artist whose design work has been inspirational too. Oh, and James Cameron of course - I was stunned when I learned that he had designed so much of the tech in "Aliens" and it still stands out to me as a high water mark.
There are two books available by Greg including work produced for his Doctor Grordbort Project for those of you interested: Doctor Grordbort's Contrapulatronic Dingus Directory and Doctor Grordbort Presents: Victory (Dr. Grordbort Presents Victory: Scientific Adventure Violence) 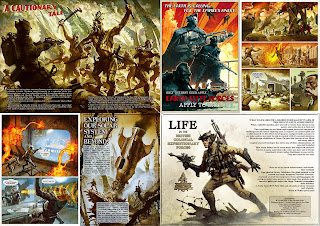 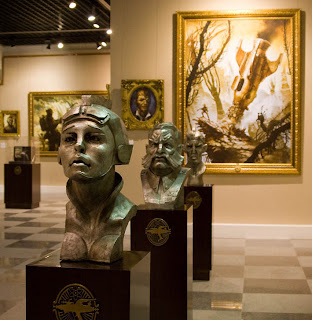 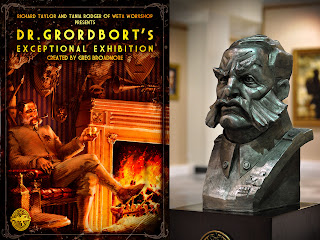 MC: What type of project; Film, Genre, Subject Matter or Video Game have you not yet had the chance to work on that you'd like to get the opportunity to tackle? What would be your ultimate dream gig?

GB: That's really tricky to answer. I think the thing I'm most excited about is bringing the Dr. Grordbort's world to life. I'm really lucky to have the chance to develop it, and it really is my dream gig as you say. 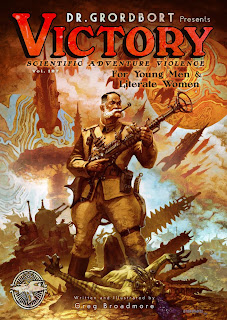 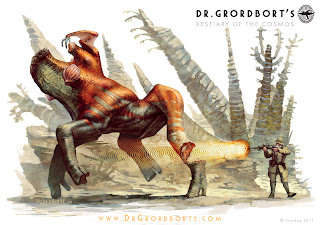 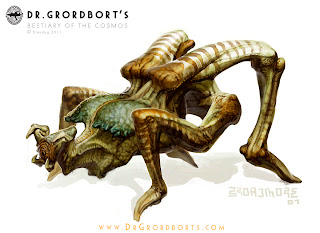 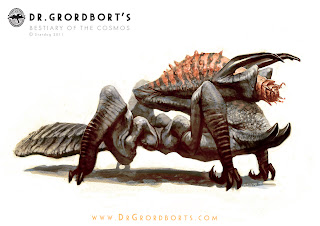 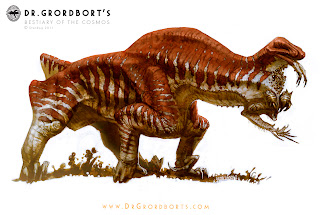 MC: What project have you worked on that you felt really kick started your career and has gotten you noticed? How do you think that gig helped build your reputation?

GB: I think Kong was a big one for me. I loved working on that film, and we got some great opportunities to get our work noticed in it. District 9 is ultimately the film that I've made the largest mark in. I've worked on many films where dozens of designers contribute, and while I've enjoyed that, it always amazed me how wasteful the process was. I wanted to work on a film where I got more of my original ideas and thoughts to show through, and D9 became that film. 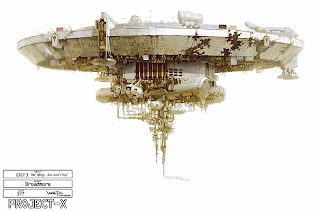 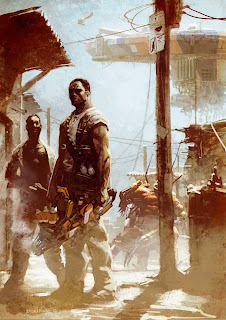 (Please Note: The Concept Design of the Alien Prawns were designed by David Meng. Model/Concept by Jamie Beswarick. The Paint Color Scheme and Textures of the face and carapace were designed by Greg) 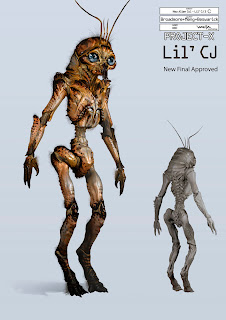 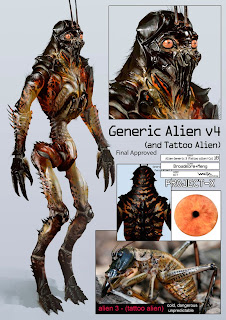 MC: Leaving off with a last piece of advice to aspiring creature designers, what can you suggest to students who continue to hit creative blocks and are looking for inspiration and motivation to help get them past the block?

GB: Blocks are tricky. They're almost always emotional. I think it's best to remind yourself, that this is entertainment, it's not really serious at all. It's about fun. And you can't really get it wrong. 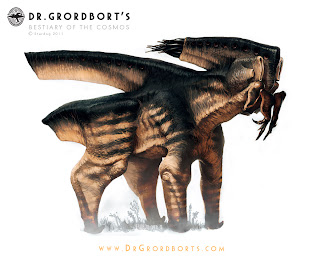 MC: Greg, it has been a pleasure. I personally want to thank you for taking the time out to answer these questions and on behalf of Jen, Myself and all of the students at AAU. Good luck with your future career; I'm sure we'll see great things from you in the years to come and I look forward to all the weird and wacky designs you continue to produce. I hope one day we get to see the world and mind of Greg Broadmore come to life in full fruition.