As the technology in video games continues to develop and expand, the possibilities of what concept artists are capable of producing also becomes open to a broader range of detail and functions. Still, even as far as video games have come since the days of Super Nintendo and Sega, the In-Game design and models fall short to the fluid movement and amount of detail you may see in live action films (where anything is possible but they need to more strictly obey the laws of nature based upon the subject matter). 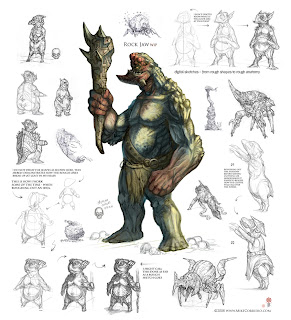 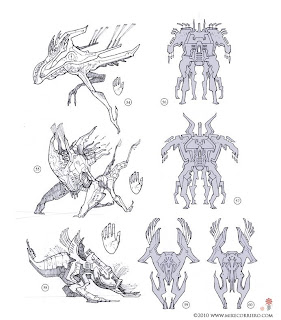 A few key elements of design to keep in mind for game designs are a strong silhouette, recognizable color schemes for the creature or character and distinct proportions in anatomy. It's just as important to know the basics of animal and human anatomy when designing a creature for a video game as it would be for anything else, so you still need to study real world animals whether from life or photos. I would recommend visiting local Zoos or even pet shops, studying your own pets and animals outside as well as watching documentaries on TV and picking up photo reference books. A few books I recommend for animal reference are the Smithsonian Institution - Animal: The Definitive Visual Guide to the World's Wildlife & Natural History (Smithsonian) The Ultimate Visual Guide to Everything on Earth. While you're at it, pick up a volume or two on human anatomy as well. Those containing photos and one that is hand drawn and capable of showing the musculature, skeletal and organ systems such as Classic Human Anatomy: The Artist's Guide to Form, Function, and Movement. Human and Animal anatomy go hand in hand when molding and transforming animals, humans, creatures, humanoids and everything beyond and in between. 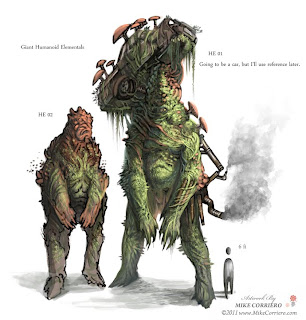 The primary difference you need to keep in mind when designing for a video game is that there are more limitations as to the amount of functions and fluid movement or details that will be visible to the gamer. With that in mind, you need to utilize other ways to make a strong impact on the gamer even if the creature is seen from afar or only at a quick glance. Game designs especially if it's a fast paced action shooter or an isometric RPG are all about "Concept" and iconic designs rather than fully rendered and polished drawings with tiny details since most of that won't even get a chance to be seen, or in the case of an isometric RPG the model will be so small it wouldn't be worth including certain details as it would go to waste. In an isometric game, details such as fur and hair are often just painted into the bump and texture maps as well as a lot of other fine details that would take up too many poly's to bother modeling at such small scales.
Take the game series Monster Hunter for example. This is a Platform RPG. 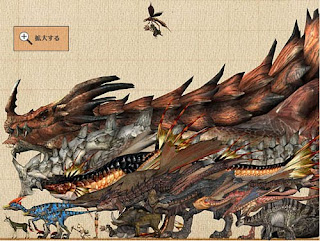 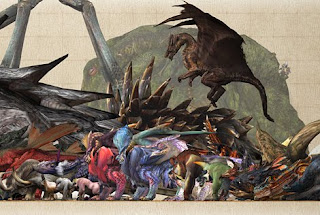 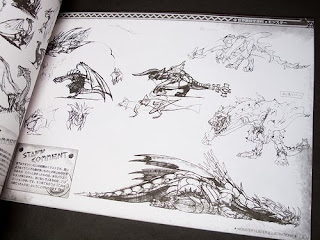 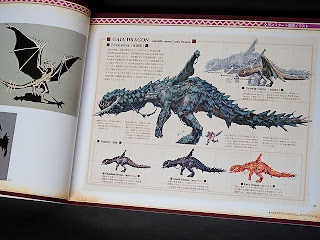 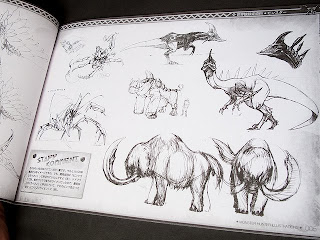 Some of the better designs are those with unique body structures and proportions that may look awkward if they existed in a live action film, but they leave the biggest impact on gamers. So the anatomy of creatures in video games provides a lot more leeway and freedom for creativity, since less adherence to the laws of nature is expected in a game world. You're less likely to question why a creature with the body structure of a hippo can fly with wings the size of a hawk because you know it's "just a game" and you're more willing to suspend your disbelief than if it were a live action film. This opens up a huge array of possibilities and ways to design a unique creature without having to explain too much about the function of design choices.
A lot of this comes down to pure aesthetic and eye candy over plausible design. Still, even then it's important to know the basics of anatomy and how your design is intended to function in the game. You'll often work back and forth with the CG modeler to fix mistakes, or explain things that might not communicate too well in 2D once it's transfered over into 3D.


When you design creatures for a video game it's not important to play the game, as you may not have the time, but it is important to research and watch in-game trailers and take note to what is and isn't possible. If you take a look at the game
Monster Hunter the series you'll come across a very broad range of creature designs. The most important thing to keep in mind is the first impression the creature will make when seen in-game. A few of the designs below are concepts that succeed very well in that case. They have strong and unique silhouettes and exaggerated body proportions. 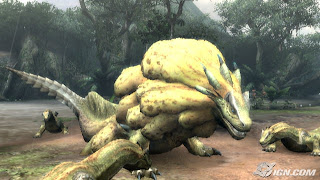 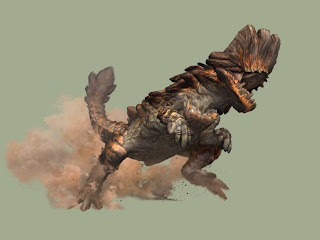 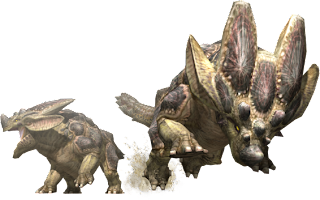 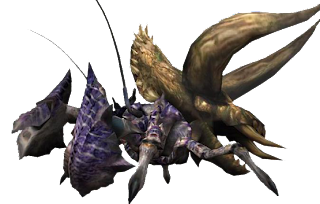 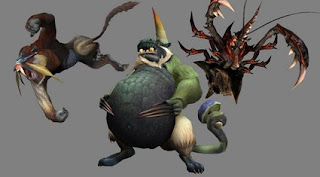 Various types of games restrict details even further, and this is when you really need to focus on what's important in order to produce a design that will communicate and be easily identifiable to the gamer. These type of games are Isometric RPG's such as Diablo 3. Now there has been the advancement where you're capable of scrolling with the mouse to a more eye level view in these games, as well as zooming in at times, but your design needs to focus more on how it will look at a 3/4 top down view and at a thumbnail size. This is where you'll focus very heavily on largely exaggerated proportions and color schemes to really make your creature distinct from a distance. In this sort of game platform, you'll rarely if ever see the underside of a creature. So if you decide to put eyes on the underside of the chest of a quadruped body structure, you may never see those eyes; Just something to keep in mind.
Refer to this In-Game trailer of Diablo 3


The concepts below focus heavily on exaggerated proportions and silhouette. When you take a look at the concepts in the game, a lot of the designs often get lost at such a small scale and this is why it's important to really push the proportions to the extreme. Gravity can't play a big factor here, it's more important that something be almost ridiculously large so it will be seen and register with the viewer rather than fit correct proportions. 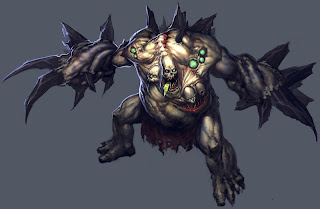 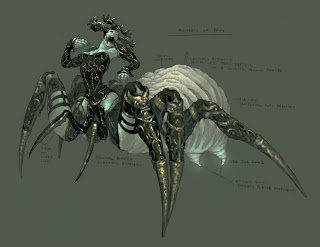 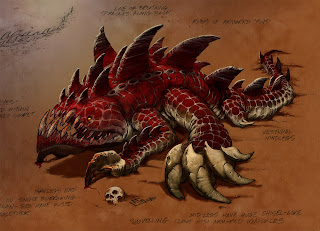 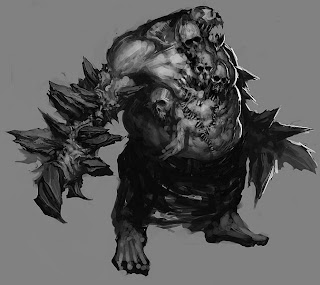 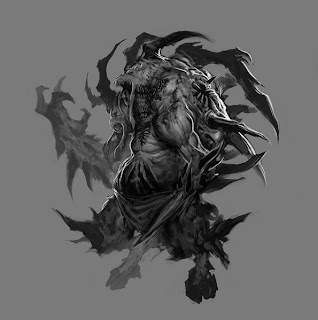 This is why it's important to learn to draw your design from various angles, overhead, from behind, at a 3/4 back view and so forth (this is called a "turnaround"). In this type of game you may end up exaggerating proportions of anatomy 3 or 4 times greater than that of a game like Monster Hunter, since the design is seen at a birds eye view in most cases. It's also important to recognize then that tedious details are not quite as important, since skin textures, little imperfections of scars, bumps on a nose or torn ears may never be visible to the gamer. Those are things that can be painted into the bump and texture maps. It's also important to take into account what types of actions the creature or character may perform in-game, whether the creature explodes into 50 tiny eel-like sub-forms or whether it needs to be capable of expanding its body to 10 times the initial size like a puffer fish.
So don't just produce a pretty looking creature that is appealing to the eye from one angle and looks good at a stand still static pose. It's your job as the concept artist to come up with possible attack actions, walk cycles, death and or birth cycles and how these actions are possible based on the anatomy and design of the creature as well as various color schemes and color reactions to what happens in-game. 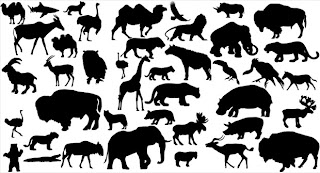 You should be able to identify a creature in a game as easily as you can identify the type of animal simply based on its silhouette. That's when you know you've succeeded in designing a creature that will leave a lasting impression on the gamer. In the isometric style RPG's the creatures often come and go so quickly and are bunched together in hordes that you hardly have time to recognize what they look like. That's why color, silhouette and exaggerated proportions are key to a successful design. 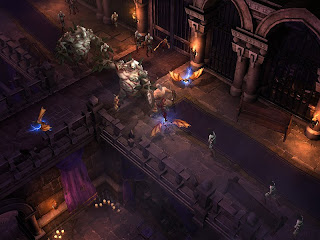 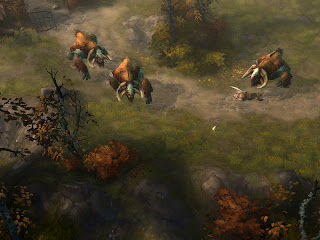 Posted by Mike Corriero at 7:08 PM