An Interview with Jean-Baptiste Monge, Part 1

I met the amazing Jean-Baptiste Monge as an online friend more than a year ago. I was already quite familiar with his beautifully rendered and inspiring fantasy and faerie themed illustration through his books, including Halloween (1997), Baltimore & Redingote (1999), À la Recherche de Féerie tome 1 & tome 2 (2002 and 2004, respectively), and Celtic Faeries (2007). All of which are hugely popular in his native France. While Jean-Baptiste's works are filled with every bit as much charm, wonder and enchantment as the wildly successful "Gnomes" by Rien Poortvliet and "Faeries" by Brian Froud and Alan Lee, no U.S. publisher has yet been savvy enough to snap them up and re-published them in English. Hopefully, for the benefit of all lovers of great illustration and fantasy art, that situation will be remedied someday soon! 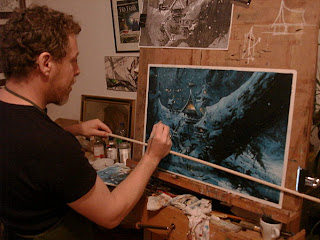 Jean-Baptiste Monge was born June 11, 1971 in Nantes, France. After 15 years in Britanny, he decided to continue his adventure in Montreal, Canada where he is currently working on projects for Sony Pictures and the gaming industry.

Note: the following interview has been edited for the sake of clarity. I barely speak any French, and although Jean-Baptiste's English is very good, a few grammatical adjustments were made here and there while making every attempt to maintain his voice and intent. 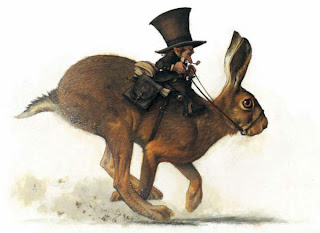 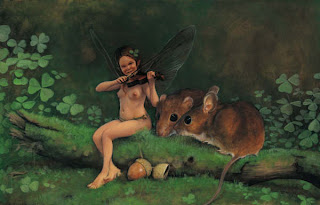 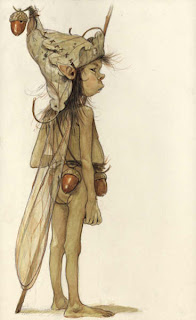 JGO: Thank you so much for generously giving us your time for this interview JB! First question; what kind of art education did you receive?

JBM: Alas, I wasn't a good student and my parents weren't wealthy. They didn't have the means to put me through the school I wanted to attend. If I had the chance I would have chosen an animation school in Paris (les Gobelins). The true story is that I learned all by myself. I left college early and an Advertisement and Graphic school in Nantes accepted me into their classes thanks to my portfolio, not  my good grades in college! I spent 2 years studying there but I didn't learn what I really wanted to, so I left again and began to work in advertising. It wasn't very exciting, but I think I learned a lot about working professionally during those times. And then I met Erlé Ferronnière (co-author of the books Halloween and À la Recherche de Féerie tome I & tome 11)  with whom I shared a great adventure, and I began doing what I really wanted to do with my career. 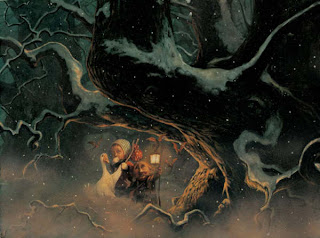 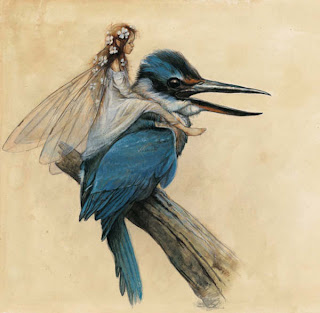 JGO: Could you tell us about some of the artists who have inspired you over the years?

JBM: There are so many artists who have and still continue to inspire me.

When I was a boy I read Uncle Scrooge, Disney has always made me dream! It was my very first true inspiration. I grew up and I read Tolkien who made me realize that the universe that I had in my head exists and that it was possible to create a world with my imagination.

When I was 14-17 years old, in my parents cellar, there were the Edgar Rice Burrough's books (John Carter, Tarzan). I read them of course,  but above all for the covers they had that were painted by Frank Frazetta. Around the same time I discovered the book "Faeries" by Brian Froud and Alan Lee (I wasn't able to buy it because it was in English and I didn't read very well )!  I love the line of Alan Lee, perfect I would say! And the style of Brian Froud is even crazier than Alan's. I found so much inspiration! And then, there was Dark Cristal ! So amazing ! 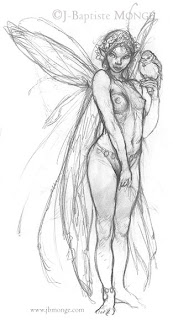 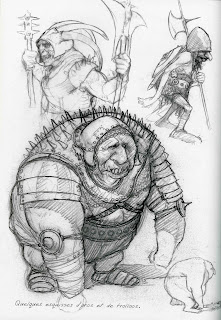 It was hard to find books I really like because there was no internet. All the books I wanted were in English, and I couldn't imagine there were so many in fact! From the age of seventeen I kept on reading and I discovered so many artists : The pre-raphaelite painters and the Pompiers painters with my artist friend Erlé Ferronnière; J. W. Waterhouse, Gerome, Gustave Doré, John Bauer, Edmund Dulac, Arthur Rackham, and Alphonse Mucha. I discovered the Art of Norman Rockwell (my second Master after Disney), Leyendecker, Haddon Sundblom, Rien Poorvliet... the list never will never end !! But today, they are so many that I'm sure to forget some, my French Friends : Pascal Moguérou, Erlé Ferronnière, Olivier Ledroit all very talented but also English and American artists like John Howe, Paul Bonner, James Gurney, PJ Lynch, James Browne, the world of Pixar, Dreamworks, Disney...They all give the strengh to go on.

I have been completely subjugated by Disney's "Tangled" and "How to Train Your Dragon" (Dreamworks). I love being astonished like that!

The further I go, the more I find other talented artists who have their own perception, and that makes me try different things. I'm still learning in fact! I'm like Jack Skellington of Tim Burton : I want to know and I want to understand how each thing is made. It's my curse and my burden. 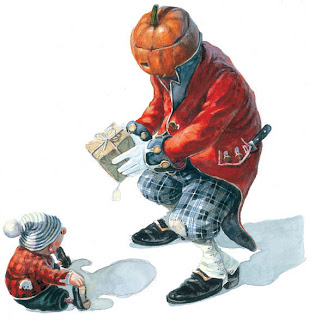 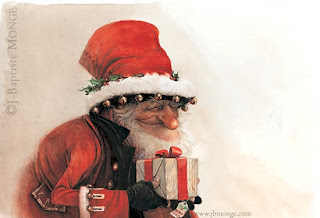 JGO: What else inspires you as an artist?

JBM: Landscapes and moods first (rain, snow, mist), the clair-obscurs, the moment before the dawn.
Secondly, trees, forest even though there are not many in my pictures – it's really inspiring. Animals, people, architecture and everythings which compose the world. I'm always looking at people in the street (sometimes staring, which, I must confess, can be very frightening for the one who is being stared at!!) My mom always said to not to stare people like that but in fact it's such an inspiration! I can find appearance, appeal, something to mimic, … I love that. I prefer the old men with their wrinkled face, ruddy and craggy.

I never sketch in the street, I keep it all in my mind and then I often dream of what I saw, and I create new characters. 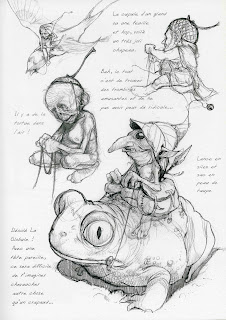 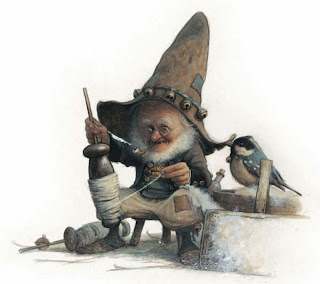 JGO: What mediums or programs do you use to create your art?

JBM: I'm a traditional painter. It's quite new that I use digital in fact. I use digital mediums for concept work (video games and movies). It's faster and more convenient to work and modify the characters like that. I bought a Cinitiq when Brian Pimental from Sony Pictures Animation asked me to work on his project in 2009. For the moment the project is on the side but I hope that it will change ;-) It's a really deserving project, in my opinion. 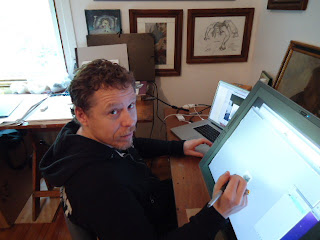 For my traditional work, I use watercolor with white gouache to add highlights on watercolor paper (Laungthon... my favorite paper), or sometimes acrylic inks (not in tube – I hate tube acrylics, the texture is so plastic to me) or oil on canvas paper. All depends of what I want to do. First I do a sketch-or several sketches- with charcoal. When I arrive at the drawing I like best I transfer it to the canvas and I add the color. I'm a curious man, I touch evreything and I try everything. For the moment, I'm working on digital – just for me, to learn. The Cintiq board is such a fantastic tool. I learned how to use Zbrush. I think it a good tool. I'm not as fast as I want, but I begin to create things and it's quite enjoyable It can be an advantage for some concept art. Some people prefer to see work in 3D, but some not at all. When I create a 2D character I know how to envision him in 3D and I can show them what his volume are with the program. So I can explain to them what my vision is even if what I show them is simple. A fast sketch on Zbrush can give them a good vision of volume  in 3D. It's also an asset for creating a picture. I sculpt when I have a doubt with the perspective and then I choose what the best angle for composing my picture. 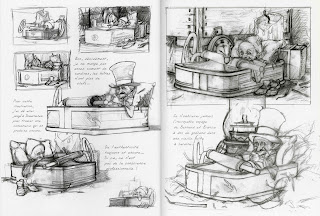 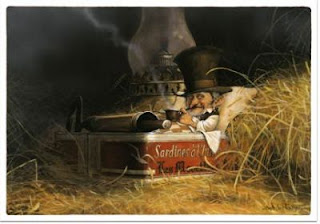 JBM: My characters evolve as I draw them. But I would love to have a more organize mind so that I could build a picture which never alters from the moment I begin to the end. I mean it would be less sportive!

So I change, erase, sometime I give up, begin again and give up again and begin again until I feel and I hear the picture living! For the pig pulling the alambic I knew that it was over when I heard the sound of the rain falling in the mud. 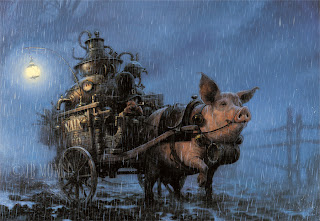 JGO: What kind of reference do you use when creating your character designs?

JBM: So many! First, for 80%, it's a lot of imagination,  but for the rest I find what I can in the books of the artists that I love or the internet (sooo convenient, the datas are quite huge), the photos I take. Usually, I put together little pieces of my reference and I re-organize them. For example; for the faces of my character I have some photos that I use for the color of the flesh. Because usually, the shapes of the faces come from my imagination, the grimaces I do in a mirror or they come from the people I meet in the street. I especially appeal to my memory.

I begin an illustration sitting at my great blank table and I finish it at the tiniest corner of it (for the best sometimes I finish it on my knees) because by the end of it my table looks like a mountain of books that I have used for reference. That is the fun !

I often put on a film chosen with care in the background to set the mood, and I listen to different music (the chieftains, instrumentals...). 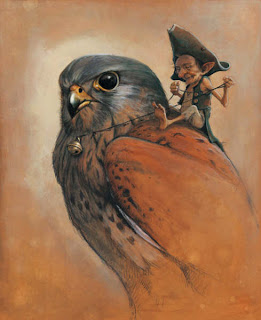 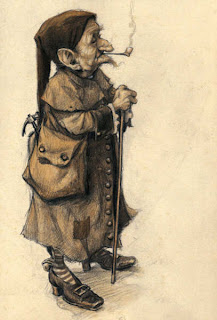 JBM: The most fun: the sketch! Finding the pose, the idea is really fun. It's the moment I prefer best because it's so alive. And after that I find pleasure in creating the textures that are found in the details of my work. The details of the faces and clothes of little people, the animals, I would be able to spend hours and hours to find the perfect color with the perfect shade and light of the skin, a cloth, a bell, a big schnoze (I learned this word in Baltimore ^^) of a goblin who appreciates some good whisky. Some will say that I'm a kind of geek... sure they are so right ! 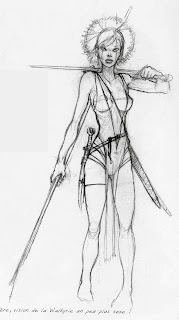 The most difficult : to know very sharply when I have to stop before going too far out before it's too late and that the illustration is missed for me. I'm not so confortable with organizing big scenes: large decor with characters. I tend to prefer little intimate scenes. I would like to have much time to work on it. Unfortunately, the realisation of a book doesn't give me the opportunity. 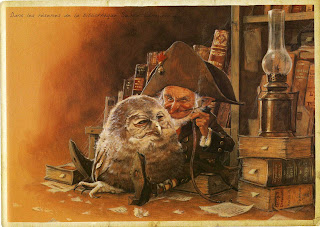 JGO: Are there any character designs that you have done that are your favorites?

JBM: Dunlee Darnan, the cover of Celtic Faeries, the illustration which won the silver award in Spectrum 16. The pig which is pulling the alambic under the rain, Whiskey Man,
Ragnarok le grand Dragon which has been unfortunately misprinted in the book. The original oil is really full of details but in the book it seems that it's a bad gouache quality. 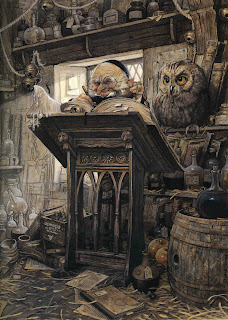 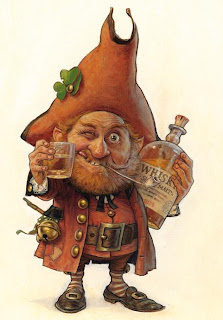 JGO: Who are some of your favorite character designers that are working today?

JBM: A lot as usual! Iain McCaig, the guys of the Weta Workshop (Paul Tobin ...),
Peter de Sève, Aleksi Briclot, Nicolas Marlet who worked for Kung Fu panda and How to Train Your Dragon (Dreamworks), Alan Lee of course, Chris Sanders (Lilo and Stitch...), Glen Keane (Tarzan, Pocahontas, The Little Mermaid), Jin Kim (Tangled)... etc. etc. etc. I wish I knew all of the them in person.

To be continued in Part 2!
All images on this post copyright Jean-Baptiste Monge