I had quite a few Illustration majors enrolled in my classes last semester, and several of them seemed almost apologetic for wanting to focus their careers on children's picture books and not animation. I assured them that the two often influence one another and have a great deal in common, including character design, storytelling, staging, and (at times) backgrounds. There are dozens of examples of picture books having been adapted into everything from simple animated shorts, like this early rendition of "Where the Wild Things Are" by Weston Woods , to feature length CGI films like the 2008 adaptation of Dr. Seuss' "Horton Hears a Who!". But few adaptations retain the look and spirit of the original like the 1982 BBC Channel 4's 26 minute animated version of author Illustrator Raymond Briggs' picture book "The Snowman".

Aside from the introduction (two versions exist, one featuring a very blond David Bowie) and the now classic song (shown above), which was sung by a young Peter Auty, the film is wordless, as is the picture book it was based upon. The animation retains the look of Briggs' sensitive colored pencil illustrations because it is hand animated in colored pencil on frosted cel vinyl, which is truly a monumental achievement and an almost unimaginable undertaking by today's standards. The film was brought about by independent Producer John Coates, who in 1981 seized upon Channel 4's call for new independent projects and teamed up with late Director and animator Dianne Jackson.  Jackson animated the snowmen's Christmas party sequence herself. The sequence where the boy his brought by the Snowman to meet Father Christmas was also added by Jackson. Author Briggs was not pleased by the addition, though critics agreed that the added sequence felt like a natural extension of the original tale. 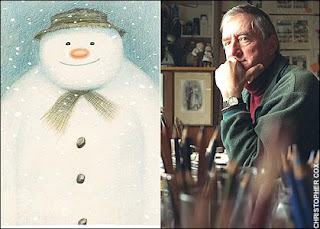 Though Coates had to mortgage his home and hit up The Snowman's original publisher, Hamish Hamilton, to supplement Channel 4's original investment and enable the film to be completed, the gamble paid off. The film was broadcast to great acclaim during Channel 4's first Christmas. It has been a holiday classic for British audiences ever since, and has continued on to success in other Countries through DVD and soundtrack sales. I personally saw it for the first time when we had a screening of it in 1989 at Walt Disney Feature Animation Florida. At that time we were told that it was one of veteran Disney animator Glen Keane's favorite animated shorts, and it's easy to see why.

View Part1, Part 2, and Part 3 The quality of the uploads on YouTube is quite poor in comparison to the DVD quality.