Proper Use of Reference and Anatomy: Creature Design - Part One

Reference, Research & Studies are Key Elements
to Understanding and Improving your sense of Creature Design
The use of references and research regarding animal anatomy is a vital and practically mandatory part of creature design. It's a necessity to understand the function of living and extinct animals, prehistoric mammals and dinosaurs. Whether you create a design that is a horrid monster of mutilated and malformed flesh, teeth and spikes- or a more subtle, naturalistic concept- it's equally important to understand the basics of skeletal, musculature and anatomical structures of all things living, both past and present. We'll discuss monsters, both horrific, scary abominations and magical or mythical aesthetically pleasing designs another time. This series of topics will focus on an approach to more naturalistic creatures.
(Note: Artwork Copyright National Geographic - Artwork by Kennis and Kennis) 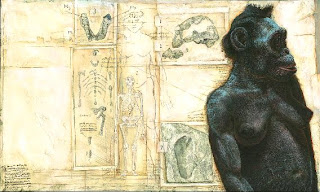 Visiting zoos, museums, observing indigenous life, researching online, collecting photos and drawing from books are all great resources to gather information and reference. Photo reference can be very helpful if used properly; if used incorrectly it can become counterproductive. I'll explain why in Part Two. Three great books to pick up for animal references, social behavior, motion and other important information are all produced by DK Publishing and all are Smithsonian books ANIMAL , ANIMAL LIFE and NATURAL HISTORY
(Note: Artwork Copyright National Geographic - Artwork by Kennis and Kennis) 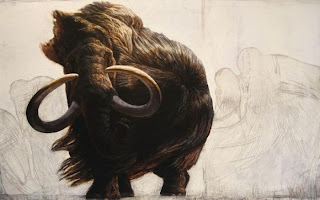 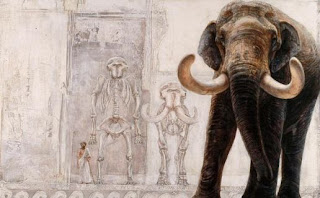 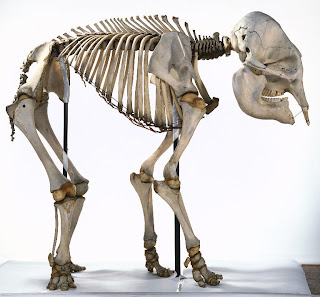 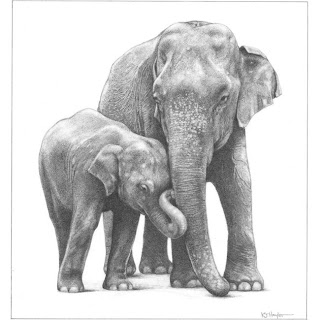 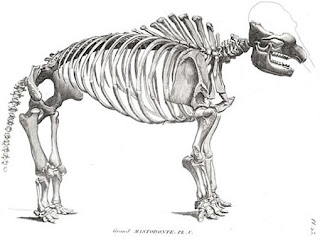 (Note: Artwork below by Heinrich Kley.) 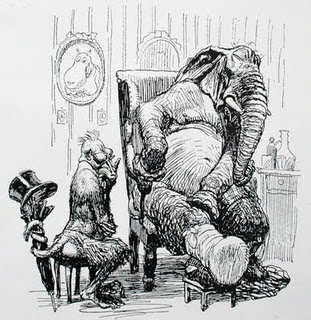 The Circle of Life - History and Background
In the wild lands of Africa some of the most diverse species of animal life live among one another. Certain species tend to live in solitude such as the Cheetah or Leopard (though sometimes males from the same litter will hunt together) or the Lion who live in large groups called prides often comprised of 13 females or as large as up to 40 and generally 1 dominate male. Within this continent there exist some of the largest of animal species (African Elephant) as well as some of the most rare (Okapi) and some of the smallest (Nairobi Fly) all cohabiting the same land though various species are separated within the vast terrains and borders of such a large continent. 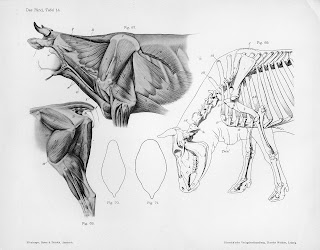 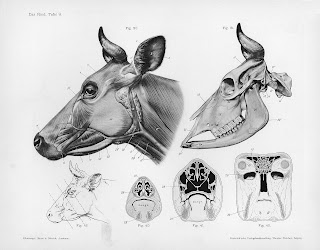 (Note: Artwork below by Fred V Theobald – from Agricultural Zoology) 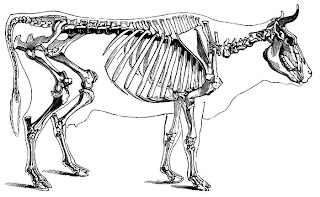 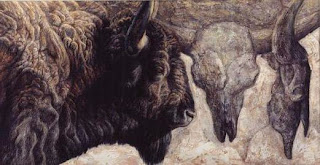 The best-known taxonomic ranks are, in order: life, domain, kingdom, phylum, class, order, family, genus, and species. An immediate distinction between 3 different species all having evolved within the same Family would be the Cheetah, Leopard and the Lion. The Cheetah has a slim lengthy build for speed and agility, while the Leopard is more stout with shorter limbs, lives in solitude, is more powerfully built for climbing and tends to relax or carry its prey into trees. The Lion being of the largest and strongest of the three hunts and lives in large prides. Those are huge differences even among only three species all deriving from the same "Big Cat" Family. Aside from living animals, you have prehistoric mammals and other animals that have gone extinct as well as dinosaurs. A few good books to check out for dinosaur skeletons, illustrations and reconstructions along with other important information are Feathered Dinosaurs - The Origin of Birds , The Great Dinosaur Discoveries and Prehistoric Life - The Definitive Visual History of Life on Earth. I can't stress enough how much I highly recommend adding at least 1 or 2 of these 3 books to your reference libary. Pick up one of these along with the above mentioned "Smithsonian 'Natural History'".
Remember: Research, read, study, sketch, observe, learn, practice, absorb. 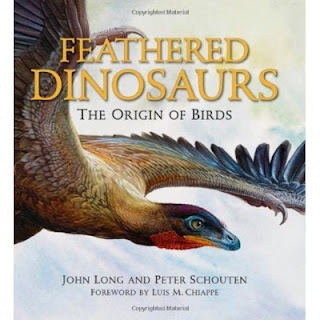 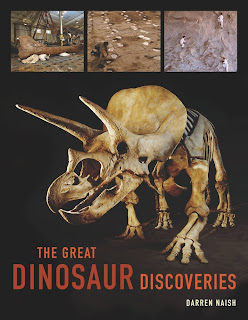 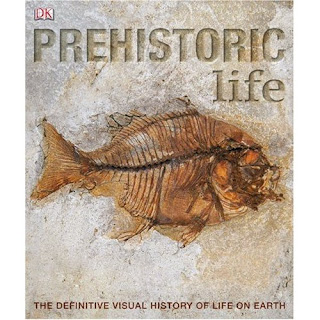 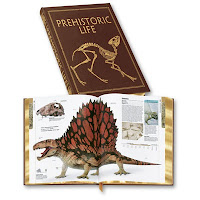 (Note: 4 Images below taken from the book "Feathered Dinosaurs - The Origin of Birds" (c) DK Publishing.) 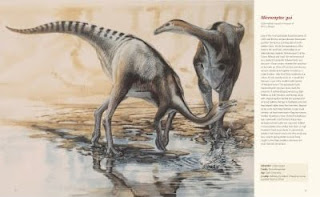 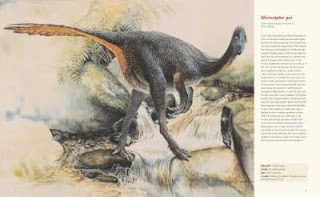 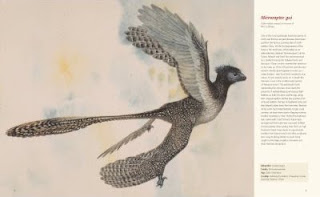 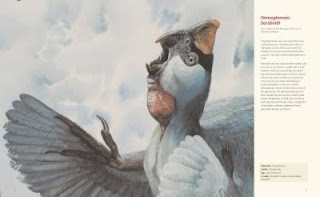 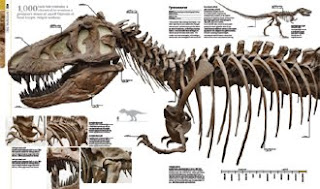 The reason I chose Africa as an introduction into animal anatomy and reference is because it is the second largest continent on Earth and it's the only continent to stretch from the northern temperate to the southern temperate. Meaning "it's climate ranges from tropical to subarctic on its highest peaks. Its northern half is primarily desert or arid, while its central and southern areas contain both savanna plains and very dense jungle (rainforest) regions. In between, there is a convergence where vegetation patterns such as sahel, and steppe dominate." - Wikipedia 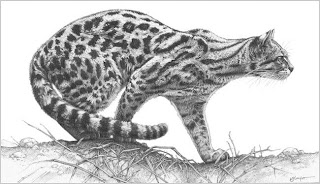 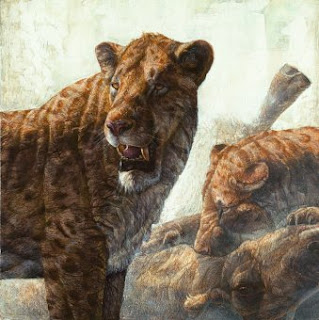 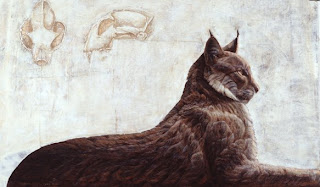 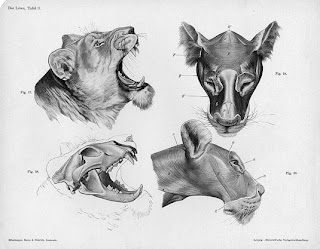 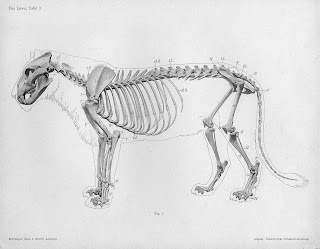 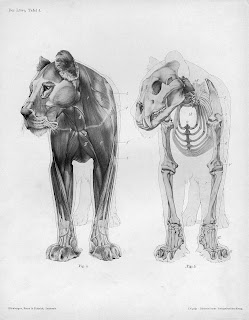 Male and Female: The sex of an animal may determine differences in a species regarding size, weight, additions of antlers, horns or manes of fur and so on. The sex of a creature is another factor to take into account when designing, even if you have no intention of showing one or the other. It might also interest you to research and recognize that certain species of animals can reproduce Asexually where the offspring inherits the genes and traits of a single parent. There are various methods of asexual reproduction, in some cases eggs are laid and fertilized by the same animal (male/female - there is no distinction. They are referred to as Hermaphrodites). In other cases, though reproduction is performed in a similar fashion, animals like Sea Anemone perform reproduction by budding and breaking off small pieces that regenerate and begin to grow into a entirely new Sea Anemone. This process of reproduction appears to be a form of cloning. Note the difference of a Male Lion and a Female Lion in the photo below.
(Note: Photographer Unknown(c).) 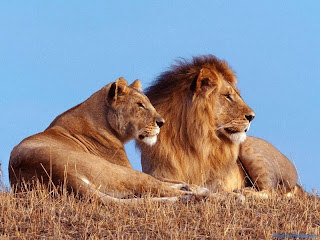 Aside from male and female differences among a species, you also have interbreeding of closely related species within the same Family that branch off into something that design wise is very familiar but with the introduction of a few distinct differences. In the photo below you'll see a Tigon and you'll notice the slight striped pattern on the fur as well as a minor difference in the length and pattern in which the mane has grown. Physiologically there are minor anatomical differences that take affect as well. The size of a Liger or a Tigon may vary and in most cases grow much larger than either of the species it originated from. These are all things to consider when referencing images, research/reading and observing animal anatomy.
(Note: Photographer Unknown(c).) 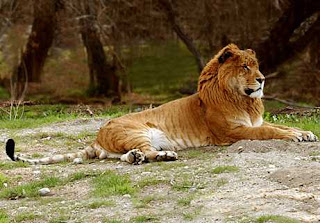 Coming up in Part Two: Proper use of Reference - What is correct and what is counterproductive? Photo reference is important, but there are many ways of using such reference, some of which are more productive whereas others are more counterproductive....Check back soon.