You've learned about including a Dominant (large) shape, Subordinate (medium) sized shapes and an Accent (small) shape in your character designs, which together can create a form which is pleasing to the eye. Similarly, we are all drawn to forms that have a fair number of straight areas that play against curved areas. Think of a very fit woman or man; a shapely woman turned to the side has all sorts of straights playing opposite curves, and man's flexed bicep is curved on top and is straighter across the underside of his arm .People who are out of shape are mostly curves against curves, while very thin people are mostly straights against straights. Look at the photos below. The woman's torso, nearly in silhouette, has very dramatic straights that play against equally dramatic curves. As pure design, the photo works well also as the figure is the dominant shape, the negative space on the right hand side is subordinate (medium) and the negative space on the left is smaller (accent), and each of these shapes is interesting and varied on it's own. Now look at the two horses. Even in the animal kingdom within the same species we're drawn more to the form of an animal with a greater degree of straights against curves. Which horse has a silhouette that is more pleasing to the eye? You would likely say that the horse on the bottom is the more beautiful of the two; he has more dynamic straights against curves than the draft horse above him (click on any of the images below to enlarge them): 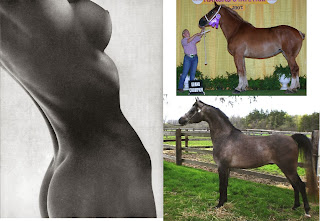 Action Lines are the dominant line of action within a figure. The torso above has a sweeping arc of an action line that curves from the upper left hand corner of the photo to the center-right at the bottom. Action lines can help you to convey attitude, motion, and personality. Let SpongeBob and his friends explain, below (from notes by Sherm Cohen): 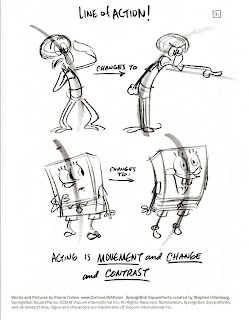 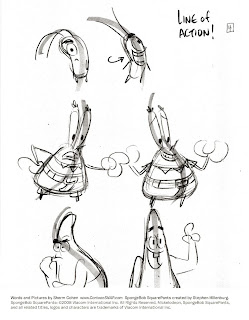 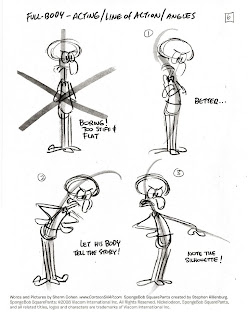 Now lets put these all together to create strong silhouettes with great design and action lines that tell a story: 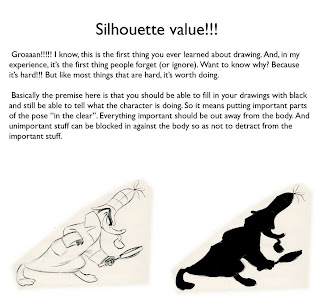 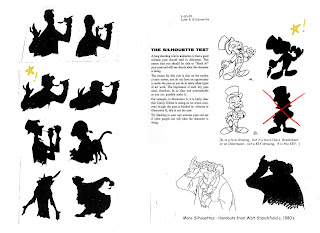 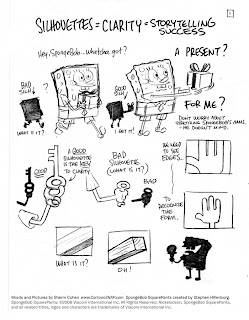